Rapid prototyping encompasses a range of manufacturing techniques used to generate a physical model from a computerized one. Although the specifics depend on the method used, the general concept is simple: engineers upload a CAD file into a machine, and that machine quickly and accurately reproduces the model in a physical medium. Because of its numerous benefits, the process is growing in popularity across industries.

The biggest draw is its speed; rapid prototyping streamlines the product development process by allowing a functional model to be produced in hours or days rather than weeks. This concept is ideal for many companies since it allows for faster and sounder decisions on whether a design needs to be altered before production.

Contact us today to discuss your rapid prototyping needs.

Rapid prototyping is best suited for small components, particularly those that could be usefully modeled in thermoplastics. Still, this scarcely narrows the field of applicable industries.

The Hendey Group serves a diverse customer base that finds utility in rapid prototyping for concept models or functional prototypes. Such industries include:

Rapid prototyping poses many benefits over alternative methods. Aside from its speed, it also carries advantages, such as: 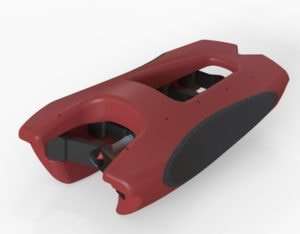 Choose the Best Rapid Prototyping Process for Your Needs

The optimal rapid prototyping process for a given product requires careful consideration. Each prototyping technique has its own strengths and weaknesses, which must be balanced against the constraints of your project. Most rapid prototyping will rely on a form of 3D printing. The most common options are:

An alternative to the 3D printing processes mentioned above is urethane casting. This process utilizes 3D printed master patterns and silicone molds to cast urethane material into low-cost, high-quality precision parts. Similarly to 3D printing, it allows manufacturers to rapidly produce prototypes (and production-level parts), enabling them to have greater design flexibility.

Turning Your Ideas Into Products at The Hendey Group

Prototyping is one of the most crucial stages of product development. A well-rendered model gives you the best possible insight as to the form and function of your final component. Rapid prototyping expedites the procedure, making it faster and easier to make critical design decisions.

At The Hendey Group, we draw on our extensive engineering experience to take your product from concept to reality, advising you on the best prototyping techniques along the way. For more information about how we can benefit your design, submit your inquiry today.

Let’s discuss your complex product design and how our team can help you make it more understandable to your clients, investors, and the rest of the world.